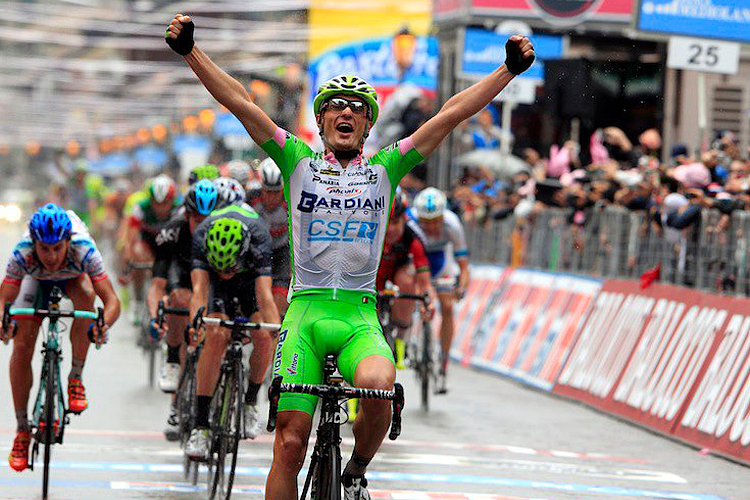 Many races are decided in a sprint finish. They can be long or short sprints. The sprint can be either from a small group who have broken away or in a large bunch sprint. Whilst every rider can’t pretend to be Mark Cavendish, you should seek to improve your sprint in training.

In most cases with either road or circuit races in the UK lead out tactics they use in the Tour de France won’t be used. So normally there is little or no supporting team involvement, the actual sprint can be very short indeed. No single rider wants to act as lead-out man for the rest, and consequently ruin their chances. So what happens is the break goes slower and slower until someone’s nerve cracks.

Whether sprinting from a big bunch or from a small group, certain principles apply. Firstly, stay in the most sheltered position for as long as possible. Which means, find a good wheel to follow, (preferably your targeted opponents). Move out into the wind only to make your effort. It’s a good idea to practise this in training with mates and see what a difference it makes.

The finishing sprint is often but not always the highest speed during a race. Therefore, wind resistance is a big factor. Be aware of not only the best wheel to come off but from which side the wind is blowing, try to come off the sheltered side.

The second principle is correct gear selection. Consider if the wind is against you, if it is a uphill finish or the distance is from the last corner. You may want in these cases to gear down. But on the other hand if there is a bunch sprint at the end of a long straight on flat or descending roads, then you should gear up.

Trying to change gear once you’ve launched your effort is fatal, a missed gear change at this speed- the consequences are not appealing.

Thirdly, make sure you have somewhere to go. Don’t allow too many riders in front of you for the wind-up to the finish. The riders in front will not move out graciously to allow faster you to go past then! Be aware of the opposition and consider where in the bunch are the good sprinters. If one should make an early move, too early in your opinion, try to get over onto their wheel.

If you can, place yourself, where you won’t be forced into the wind. Good bunch positioning skills come into play at this point. Access your ability compared to your rivals. If you consider you are the strongest and the finish is either up a hill or into the wind, then launch a long sprint. This should hopefully tire the more specialists who would normally win in shorter contest.

Conversely, if you’re tired but a talented sprinter then do your utmost to engineer a short sprint. Many sprinters can be seen to be yo-yoing of the back of the group only to come alive at the finish and win with a short devastating sprint. This is why the strongest rider does not always necessarily win.

If on the other hand you’ve decided you’re a no-hoper, then go for a long one before anyone expects it, certainly before the 200 metres to go sign. Maybe the sprinters figure you will fade and concentrate too hard on watching each other thus enabling you to win, it has happened………